There are ten players on each team: three attackmen, three midfielders, three defensemen, and one goalie.

Attackmen typically spend the entire game at the opponents’ end of the field. They cannot cross the midfield line during play unless they are replaced by a midfielder so that there are always at least 3 players on the offensive end. Attackmen need to be extremely agile and excellent stick handlers. Good attackmen should be equally capable with either hand.

Midfielders (also commonly known as Middies) roam the entire field. They should typically be your best all around athletes and they need to be in very good condition because they cover an enormous area. Middies need to be good defenders, and they need to be able to be strong on the attack, but their real value is in their ability to transition the ball from the defensive to the offensive ends of the field. Middy’s are the real work horses of the lacrosse team. Some coaches choose to have defensive and offensive midfielders.

Defensemen (Long Poles) are the enforcers. They are the players who are capable of dictating to the opponents attack where they can go, and where they will be punished for going. They need to be very physical, but still extremely agile. They utilize much longer sticks up to nearly 60″ long which allow them to disrupt the opponents attack. Great defensemen need to have exceptional feet. Position on the field is the key to being a great defender. Cutting off the opponents angles to the goal is critical.  The defenders job is often also to “Clear” the ball down the field after a turnover out of the defensive zone.

The head of the crosse on both long and short crosses must be 6.5 in (17 cm) or larger at its widest point. The throat of the lacrosse head for college must be at least 3 inches wide. For high school play, there is no minimum width at its narrowest point; the only provision is that the ball must roll out unimpeded. The designated goalkeeper is allowed to have a stick from 40 in (1.0 m) to 72 in (1.8 m) long and the head of a goalkeeper’s crosse may measure up to 12 in (30 cm) wide, significantly larger than field players’ heads, to assist in blocking shots. 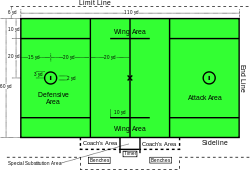 There was an error retrieving images from Instagram. An attempt will be remade in a few minutes.

Add Us On Snapchat!