Up until the 1930s, all lacrosse was played on large fields outdoors. The owners of Canadian ice hockey arenas invented a reduced-size version of the game, called box lacrosse, as a means to make more profit from their arena investments, and because severe winter weather in many areas limits outdoor play.

Since 1985, when the Canadian University Field Lacrosse Association (CUFLA) began operating a collegiate men’s league, field lacrosse has witnessed a revival in Canada. There are now 12 varsity teams. In 1994, Canada declared lacrosse its national summer sport in the National Sports Act.

In 1987, a men’s professional box lacrosse league was started, called the Eagle Pro Box Lacrosse League. This league changed its name to the Major Indoor Lacrosse League, then later to the National Lacrosse League. It grew to encompass men’s lacrosse clubs in 14 cities throughout the United States and Canada. 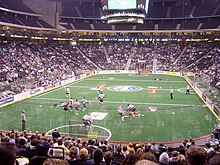 Box lacrosse is played by teams of six on a hockey rink where the ice has been removed or covered by artificial turf, or in an indoor soccer or lacrosse field. The enclosed playing area is called a box, in contrast to the open playing field of the traditional game. This version of the game was introduced in the 1930s to promote business for hockey arenas, and within several years had nearly supplanted field lacrosse in Canada.

Box lacrosse is played at the highest level by the Senior A divisions of the Canadian Lacrosse Association and the National Lacrosse League (NLL). The National Lacrosse League employs some minor rule changes from the Canadian Lacrosse Association (CLA) rules. Notably, the games are played during the winter. The NLL games consist of four fifteen-minute quarters compared with three periods of twenty minutes each (similar to ice hockey) in CLA games (multiple 15-minute OT periods for tied games, until whoever scores first). NLL players may use only sticks with hollow shafts, while CLA permits solid wooden sticks.

The goals in box lacrosse are much smaller than field lacrosse, traditionally 4 ft (1.2 m) wide by 4 ft (1.2 m) tall in box, and 4.6 ft (1.4 m) wide by 4 ft (1.2 m) tall in the NLL. Also, the goaltender wears much more protective padding, including a massive chest protector and armguard combination known as “uppers”, large shin guards known as leg pads (both of which must follow strict measurement guidelines), and ice hockey-style masks or lacrosse helmets. Also, at the professional level, box lacrosse goaltenders often use traditional wooden sticks outside of the NLL, which does not allow wooden sticks. This makes Box Lacrosse faster and rougher than the traditional Field Lacrosse.

The style of the game is quick, accelerated by the close confines of the floor and a shot clock. The shot clock requires the attacking team to take a shot on goal within 30 seconds of gaining possession of the ball. In addition, players must advance the ball from their own defensive end to the offensive side of the floor within 10 seconds.

For most penalties, the offending player is sent to the penalty box and his team has to play without him (thus lacking one player) for a short amount of time. Most penalties last for two minutes, unless a five-minute major penalty has been assessed.

Add Us On Snapchat!